The George Africanus tram was unveiled at a special ceremony in Nottingham on Saturday 22nd August 2015.

The new tram, owned by Nottingham Express Transit (NET) is now part of the city’s tram network and was unveiled at 11.30am by Norma Gregory, historian and Nottingham-based entrepreneur, before the start of the annual Nottingham Caribbean Carnival on the Forest Recreation Ground, Hyson Green, Nottingham.

The George Africanus tram is listed no.234 and was a suggestion by the public and school pupils for a tram to be named after him. 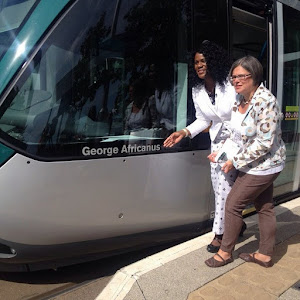 Norma Gregory was honoured by NET and Nottingham City Council by unveiling the name on new tram. Norma, 46 a former school teacher, is author of Jamaicans in Nottingham, an educational resource and director of Nottingham News Centre, a black history research and publishing organisation.

She actively contributes to the growing research activity into the African contribution andpresence in Nottingham and the UK and was commissioned to create the Nottingham Carnival Archive for Tuntum Housing Association manager of the Nottingham Carnival for the last 18 years. She is part of the Phenomenal Woman Book Tour with Ava Brown, Amanda Epe, Jenice Revers and Debbie Martin-Garcia.

Norma Gregory said: “I believe that George would be proud of this honour and his life story is a lesson many can learn from. With a vision to succeed and to contribute to society, George Africanus made himself part of the community of Nottingham through his resilience, ambition and desire to improve his life and those around him, created through his own employment business. George’s legacy and our heritage must be preserved and recognised and we must contribute to this crucial task.”

NET Marketing Manager, Jamie Swift, commented: “George is obviously very well-known now as his name was put forward on numerous occasions. His story is real rags to riches, which inspires people. It’s fitting that we celebrate the achievements of this man, who did so well in his time.”

Councillor Jane Urquhart, Portfolio Holder for Planning and Housing, Nottingham stated: “George Africanus’ story is one of hope and triumph. His impact is rightly commemorated in the places he lived, worked and is buried. Naming a tram in his honour further recognises the active and important contribution he made in our city.”