George Africanus was a native of Sierra Leone brought to England (possibly Liverpool) through West African slavers. He became a Freeman of Nottingham and a successful businessman and property owner. He was given as a ‘gift’ to John Molyneux of Wolverhampton, who was a prominent iron trader and merchant. He was raised by the Molyneux family in Wolverhampton, baptized there in St Peter’s Collegiate Church and educated to a good standard.

After frequent visits with the Molyneux to relatives in Teversal, a village near Mansfield, Nottinghamshire in the early part of his life, George becomes familiar with Nottingham and decided to move to the ‘Garden City’ around 1784. Through his apprentice training and work experience in brass foundry, George sought financial independence, freedom and a stable family life in Nottingham. His marriage to a local girl named Esther Shaw on the 3rd August 1788 is documented in St Peter’s Church Nottingham and Nottinghamshire Archives.

Through determination and courage, George established a successful employment agency called Africanus’s Register Office for Servants at 28 Chandlers Lane. This location is now situated at the site of The Major Oak Pub on Victoria Street in Nottingham. George creates enough wealth to purchase the building for £380 in 1829 (a huge sum of money then) and was able to convert and rent out three dwellings at the rear of his property to other families / businesses. George gained voting rights and also served in the local neighbourhood watch scheme called the ‘Watch and Ward’ during the period of the Luddite Riots. He would have been prominent and well known in his time and would have lived to a good standard through hard work, resilience and wise business endeavours. He burial site is marked with a green plaque, sponsored by the Nottingham Evening Post newspaper in 2003, in St Mary’s Churchyard, Lace Market, Nottingham. 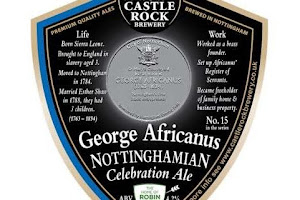